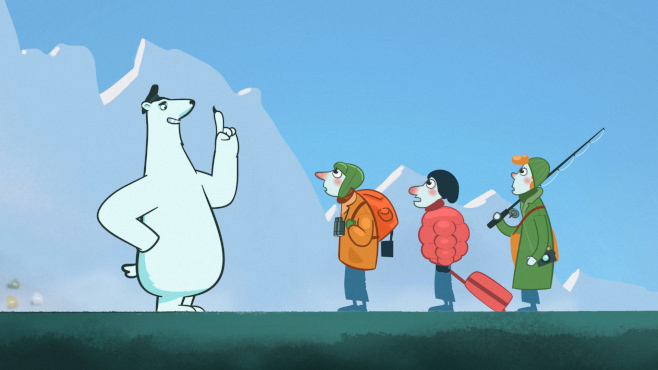 Alien species pose a global threat to biodiversity, and the plants and animals in Arctic regions are especially vulnerable to their adverse impacts. Alien species can flourish and spread in their new environments, displacing native species and threatening the entire Arctic ecosystem. To help prevent this, Finland, Sweden and Norway have launched a communication campaign explaining how to prevent alien species from spreading to the Arctic region using a few simple measures.

Travel is one of the most significant ways in which alien species currently spread to the Arctic. The situation is compounded by climate change, which makes it easier for alien species to spread to the area and increases the chances that they might be able to establish themselves in their new northern habitat.

“Are you traveling alone?” asks the polar bear guard in the animated film as he thoroughly inspects the clothes, shoes and other belongings of travellers arriving by boat and plane. The polar bear checks for any seeds, insects and parasites that the travellers may have accidently brought with them. He also offers practical tips on how to prevent the spread of alien species.

The easiest and most important way to eliminate seeds, insects and parasites is to brush, hoover and wash your bags, clothes, shoes and equipment before leaving for your trip. Fishing equipment and canoes, for instance, should always be disinfected before travelling to an Arctic destination. The rule is actually quite easy to remember, since you should not move any material from the land into the water without first disinfecting it, even in other places.

The animated film, which is in English with subtitles available in 11 languages, was released at the same time in Finland, Sweden and Norway, and the goal is to disseminate it to a wide audience in these countries and internationally. The target audience of the film includes travellers and residents of the region, as well as researchers and students. The idea is to show the film to travellers when they book their trips, but also on the ship or plane when approaching the Arctic. With this in mind, the campaign is seeking partnerships with cruise operators, airlines, travel agencies and diplomatic missions.

The campaign is a joint endeavour of the Norwegian Institute for Nature research, the Swedish Environmental Protection Agency and the Ministry of Agriculture and Forestry in Finland. Funding for the film was provided by the Nordic Council of Ministers and the Governor of Svalbard.

The communication campaign is part of the implementation of the Arctic Invasive Alien Species Strategy and Action Plan approved at the ministerial meeting of the Arctic Council in 2017.

The term ‘invasive species’ refers to a plant, animal or other organism that has been introduced by humans, either intentionally or unintentionally, into a location outside of its natural area of distribution. Harmful invasive species are species that pose a threat to biodiversity.