The Ministry of Agriculture and Forestry has approved the new Management Plan for the Wolf Population in Finland. The management plan is a tool for managing the Finnish wolf population and wolf-related conflicts and an important means for implementing wolf policy. A wolf forum will be set up to monitor the implementation of the updated plan.

The management plan describes a variety of measures that aim to respond to the needs of people living in wolf territories and to safeguard the vitality of the wolf population.

Permanent Secretary Jaana Husu-Kallio emphasised the importance of constructive wolf-related dialogue with different stakeholders and stressed that it should continue at the national and regional level. A wolf forum is being established to monitor the implementation of the management plan and deal with questions related to wolves.

– The concept of the wolf forum is being designed in cooperation with administrative authorities, research bodies and stakeholders. The goal for the forum’s first meeting on 21 November is to decide on its operating principles, says Husu-Kallio, chair of the project’s steering group.

The short-term objective of the management plan is a minimum viable population, and the long-term objective is a favourable conservation status. These objectives are supported by the sets of measures detailed in the management plan, which are being implemented by several parties including the Finnish Wildlife Agency and Natural Resources Institute Finland. The measures also reflect the efforts of stakeholders.

– Managing the wolf population requires a variety of measures, including research, prevention and compensation of damage, communications and various population management measures. Another key factor is work at the local level to provide people living in wolf areas with the tools they need. Carrying out the measures in the management plan will require efforts from many different parties, and I hope our strong cooperation will continue, Husu-Kallio says. 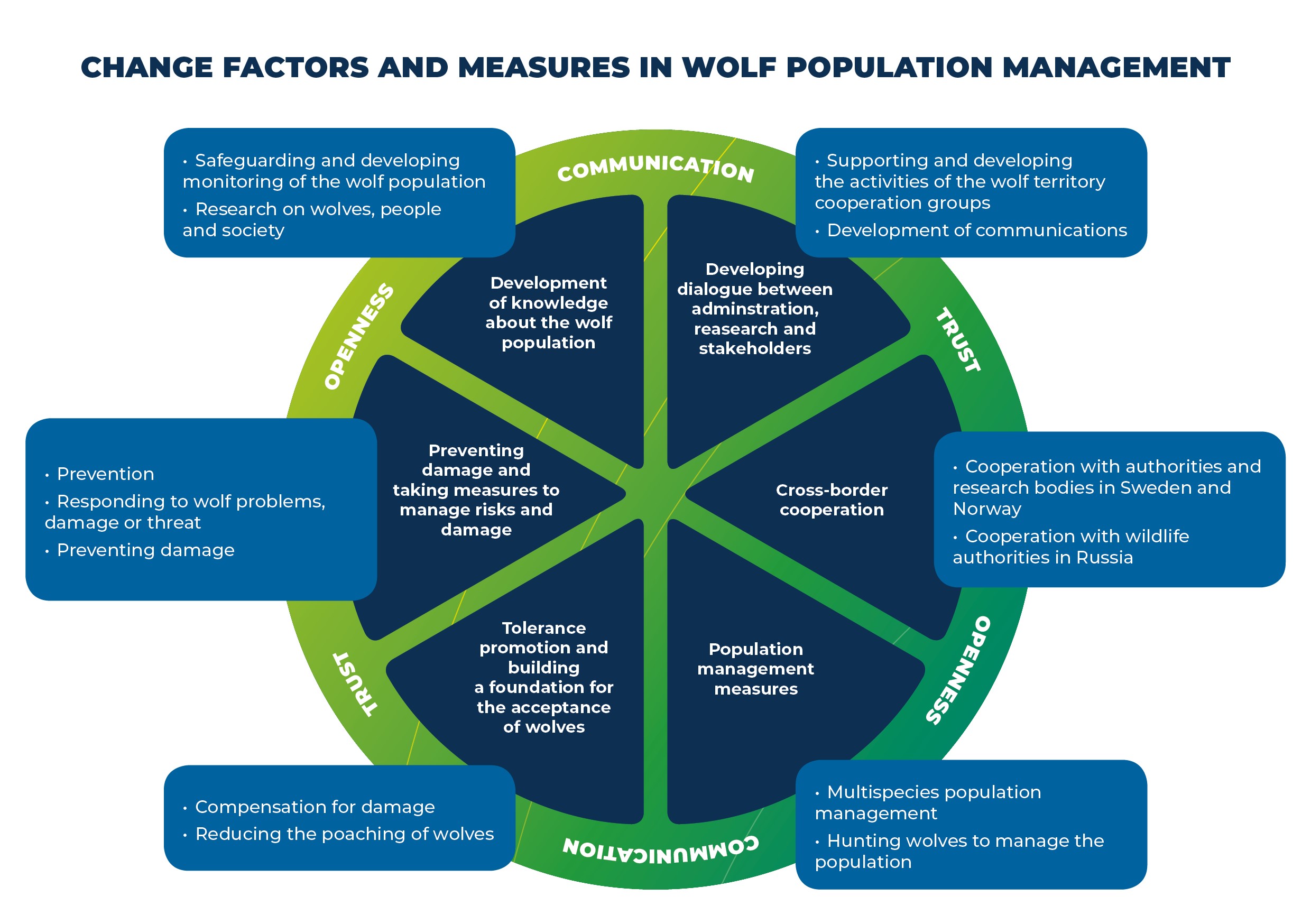 The main goals and factors of change in the Management Plan for the Wolf Population are presented in this figure in the centre of the circle. The measures related to each goal are shown in the boxes outside the circle.

Exploring the conditions for population management through hunting

–  Hunting is an important part of large carnivore population management, and I think it is essential for the wolf population as well. With this in mind, the Ministry of Agriculture and Forestry will launch a project with key stakeholders to examine whether, based on the preliminary ruling of the Court of Justice, the conditions exist for considering allowing the hunting of wolves, says Minister of Agriculture and Forestry Jari Leppä.

The management plan identifies the prevention of wolf damage to domestic animals and dogs, for example through guidance and by building large carnivore fences to protect domestic animals, as a key measure for improving people’s sense of safety and tolerance for wolves. Another important measure recognised in the plan is proactive communication in areas where wolf territories are forming.

The project to update the Management Plan for the Wolf Population began in autumn 2018 with the establishment of a broad-based preparation and steering group. As part of the update of the management plan, stakeholder events were organised with regional game councils in spring 2019, which resulted in proposals for measures to be incorporated into the plan.

The management plan received a great deal of comments, just over sixty in total. The comments were reviewed and taken into consideration while finalising the plan. The last meetings of the preparation and steering group were also held in the autumn. At the meetings, the group reviewed the changes to the plan. The CORE project funded by the Strategic Research Council, which operates in conjunction with the Academy of Finland, will carry out an assessment of the process of updating the management plan.

Efforts have been made to improve the sense of security among people living in wolf territories by further specifying how to operate in the case of wolf sightings in yard areas or nearby and by adding definitions of “wolves causing concern, threat or danger”. The specifications also clarify the roles of the police and the Finnish Wildlife Agency in the matter. A new addition to the management plan is a section on multi-species population management, which refers to the management of large carnivore and cervid populations while taking into account interspecies interactions.

The management plan was sent out for comments last June. Once the comments were received, the management plan was supplemented by adding a section about the impacts of the EU-funded Life BorealWOLF project coordinated by Natural Resources Institute Finland on the measures of the management plan, among other updates. A new measure added to the plan was the use of communications to respond to the social media challenges that contribute to wolf-related conflicts, including the dissemination of false information about wolf research.

The Management Plan for the Wolf Population in Finland