Ministry of Agriculture and ForestryMinistry of Transport and CommunicationsMinistry of the Environment
Publication date 29.6.2022 4.24 | Published in English on 30.6.2022 at 18.13
Press release 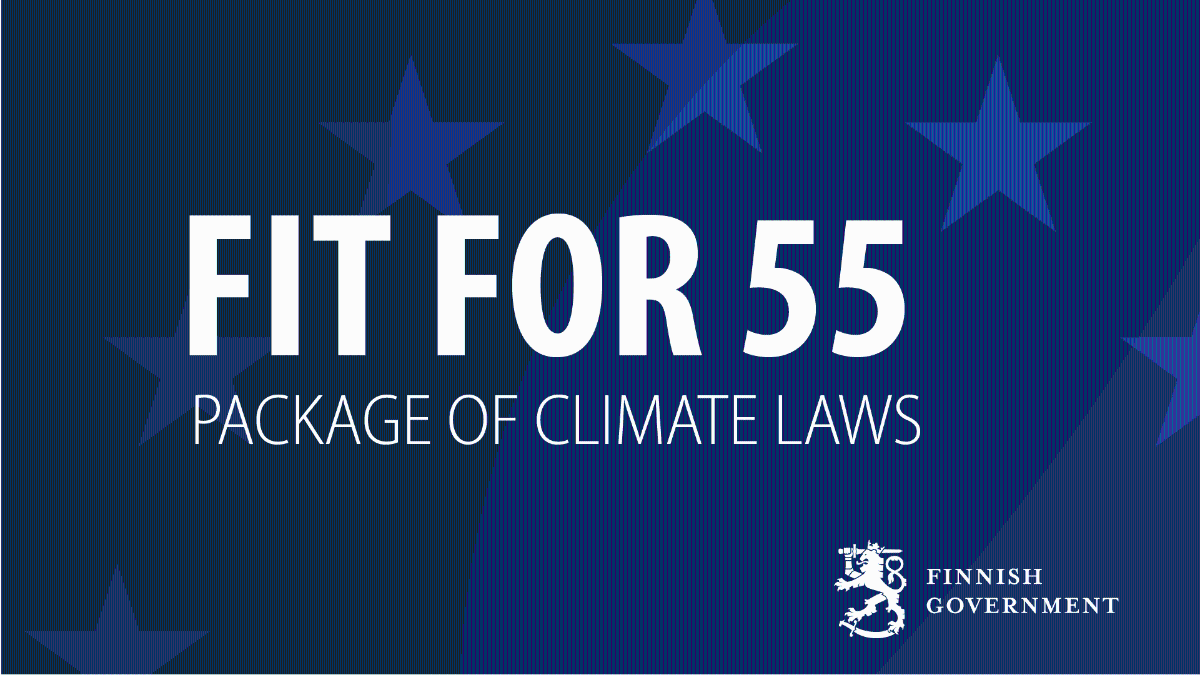 The EU target of carbon neutrality by 2050 at the latest was decided during Finland’s Presidency of the Council of the EU in 2019. On 29 June 2022, the EU Environment Council in Luxembourg reached general approaches on the key legislative proposals of the 55% emission reduction target by 2030, i.e. the Fit for 55 package, after long negotiations.

“Today we took a major step towards a climate-friendly EU as the Environment Council agreed on actions to considerably strengthen emissions trading,” says Minister of the Environment and Climate Change Maria Ohisalo, who represented Finland at the meeting.

“Emissions trading is the most effective means of the EU’s climate policy. By the agreement reached at the Council, we can make emissions trading even stronger, and also include road and maritime transport sectors and individual heating of buildings in ETS”, Ohisalo says.
Negotiations on the final content of the legislative proposals can now be started between the European Parliament, Commission and Member States.

The Environment Council agreed on several legislative proposals of the Fit for 55 package concerning strengthening emissions trading and including road and maritime transport and individual heating of buildings in the system, more effective emissions trading for aviation, Social Climate Fund, emission reduction targets for the effort-sharing sector, emission limits (performance standards) for cars and vans, and LULUCF Regulation. The aim of the EU Fit for 55 package is to achieve a reduction of at least 55% in net carbon dioxide emissions in the EU by 2030 compared to the level in 1990.

The Council adopted a general approach on considerably strengthening emissions trading from the present and including maritime transport in the system, and on establishing a new emissions trading system for road transport and buildings. The aim is to achieve emission reductions of at least 61% in the sectors covered by the reformed ETS by 2030 compared to the level in 1990. To reach this, the Commission proposes that the rate of the annual reduction of the emissions ceiling will be tightened as proposed by the Commission. In addition to this, there would be a one-off reduction in the number of emission allowances to be released to ETS in the year following the entry into force of the directive.

In ETS part of the allowances are allocated to the operators free of charge. The Council considers that, after the Carbon Border Adjustment Mechanism (CBAM) has come into force, this free allocation should end progressively in the production of products concerned by the CBAM.

According to the general approach, maritime transport will be included in ETS from the beginning of 2024, with a three-year transitional period. Winter navigation will be taken into account in ETS in the maritime transport sector with regard to ice-strengthened vessels.

2. Social Climate Fund proceeds to negotiations with Parliament – Finland, Denmark and Sweden critical towards the fund

The Environment Council adopted a general approach on the Social Climate Fund. The aim is to compensate the vulnerable households, microenterprises and users of transport services for the impacts of emissions trading in road transport and individual heating of buildings.

According to the general approach, the size of the fund would be EUR 59 billion in 2027–2032. Most of the funds would be allocated from the revenue from auctioning under the ETS for road transport and buildings. Funding could be granted to support projects that reduce dependency on fossil fuels. The Member States should draw up national plans on the measures. The Member States could also use support from the funds for temporary direct income support for vulnerable households, subject to certain conditions. The ceiling for this would be 35% of the estimated total costs of the plan.

In connection with this decision, Finland, Denmark and Sweden issued a statement that quite strongly criticises the size of the Social Climate Fund, direct income support and the process where the decision on a fund of such a large scale was made by a qualified majority.

The general approach of the Council will improve the effectiveness of emissions trading in aviation. In particular, phasing out free emission allowances by 2027 would guide the aviation sector in a more sustainable direction. Similarly, it would be important to increase incentives to use renewable fuels in aviation, as this is an effective means to achieve fast reductions in emissions from the sector.

The Environment Council adopted a general approach on the Effort Sharing Regulation that comprises emissions from e.g. agriculture, transport and waste management. The EU target for the effort-sharing sector rises from 30% to 40%. The national emission reduction obligations of the Member States are as a rule between 10 and 50%, based on the GDP. Finland’s obligation is 50% by 2030. The Council’s general approach confirms that the Member States can use different kinds of flexibilities to reach the target, including flexibilities over time and between sectors and transfers between Member States. In the negotiations Finland has stressed that convergence between the obligations of the Member States will be needed if the EU wishes to achieve its target of being carbon neutral by 2050.

The Environment Council wishes to tighten the CO2 emission performance standards for cars and vans. The proposal for the Regulation strongly guides to manufacturing electric and hydrogen cars. The emission limit e.g. for new cars in 2030 would be would be -55%, i.e. at the EU level the car manufacturers should reduce carbon dioxide emissions by 55% compared to 2021. Now the target is -37.5%. This means that, in practice, no new diesel, petrol, gas and plug-in hybrid cars would be manufactured in 2035 and after that.

The Council decided to support the objective for the land use sector proposed by the Commission, i.e. to raise the net carbon sink (net removals) on the EU level to 310 Mt CO2 equivalent by 2030. According to the decision, there is commitment for Member States to achieve a sum of net greenhouse gas emissions and removals during the five-year period (“the budget 2026-2030”) and, besides this, Member States will have a binding national target for 2030.

The Environment Ministers also adopted a general approach on the proposal for a Regulation concerning deforestation. The aim is to prevent the entry of products causing deforestation to EU markets and to develop their production chains. The new obligations are mainly targeted to imports from third countries, but the rules also concern the internal market of the EU. The legislative proposal applies to six commodities: coffee, cocoa, palm oil, soya, beef, and timber, as well as derived products. With regard to deforestation and the state of forests, the period to be considered would start in the beginning of 2022. In Finland, the Regulation would in particular concern timber and wood products and products derived from bovines, with the exception of dairy products.