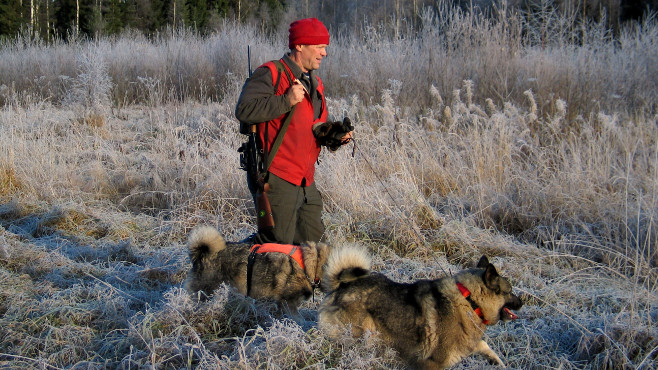 In its first meeting, the working group preparing the Management Plan for the Wolf Population discussed the damage caused to dogs by wolves and how to prevent it. The issue is topical as moose-hunting season is approaching.

Particularly while hunting in the forest, owners of hunting dogs should be mindful of possible encounters between dogs and wolves and of how to prevent harm to dogs. In the meeting, the working group stressed the fact that prevention is made up of a variety of measures and drew attention to the differences between areas. The working group heard a presentation about proactive measures and experiences of how to prevent harm by wolves.

The best way to prevent harm to hunting dogs is to identify areas where wolves are likely to be before going hunting. One way for hunters to do this is by using the wolf monitoring data compiled on the riistahavainnot.fi monitoring service (service interface available in Finnish and Swedish). The service provides a variety of data, including geospatial data on collared wolves in Eastern Finland. Feedback from users in this area has been very positive. Observation data transferred from the TASSU sighting system to the riistahavainnot.fi service can also be used to assess the risk of encounters with wolves.

It is also important to remember that wolves can be found in areas other than known wolf territories. Checking the planned hunting area for wolf tracks during the snowy season is an effective way to prevent encounters between dogs and wolves. Dogs should not be let off their leads if there are more wolf tracks leading to the area than away from it. It is, however, very difficult to determine for certain whether there are wolves moving on the terrain.

In some cases, it is possible to prevent encounters by monitoring the movement of dogs using a GPS collar and by maintaining a short distance between dogs and humans. Informing other members of the hunting party of the dog’s location makes it easier to rescue the dog from a possible wolf attack. Hunting dogs should not be left in the forest overnight, especially in wolf territories.

The working group also discussed collars and vests that can be used to protect dogs. In addition to protecting dogs from wolves, the vests feature high-visibility colours that improve the safety of dogs while moving through the terrain, particularly in areas with dense road networks. The discussion addressed the importance of advancing the technical development of the vests. For example, the use of live cameras that could be attached to the vests was considered a good area for development.

Another important factor raised by the group was communications related to the prevention of wolf encounters. The group stressed the integral role of peer communication or, in other words, utilising the expertise of other people who hunt in wolf territories. With this in mind, the goal of a planned information campaign would be to collect and disseminate information based on experiences and to use this information to promote measures to protect dogs from possible harm.

The next topic to be addressed in the work to update the Management Plan for the Wolf Population will be damage caused to domestic animals.